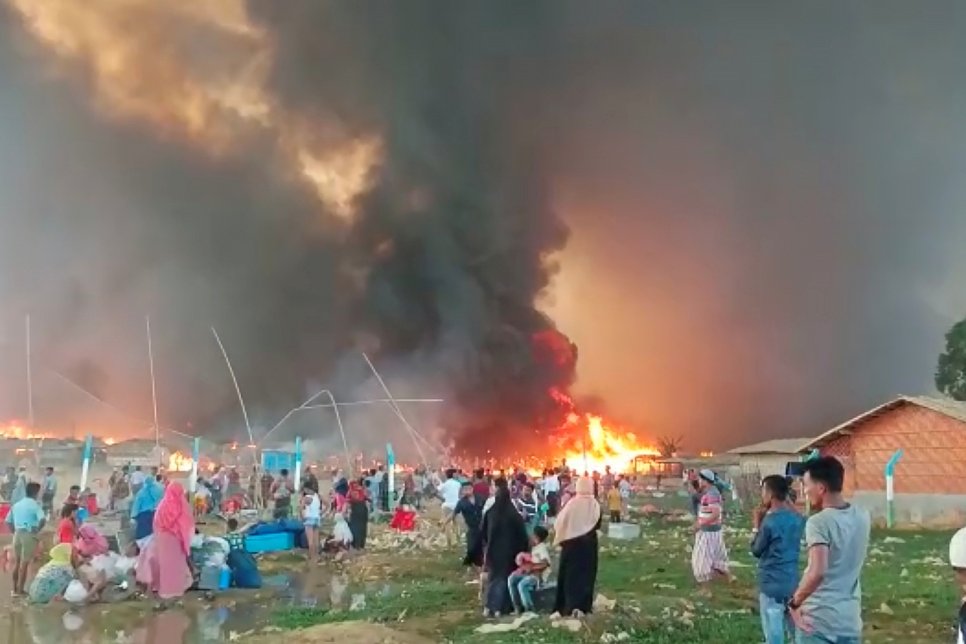 This is a summary of what was said by Johannes van der Klaauw, UNHCR Representative in Dhaka, Bangladesh – to whom quoted text may be attributed – at today’s press briefing at the Palais des Nations in Geneva

UNHCR, the UN Refugee Agency, is deeply saddened at the loss of life and immense suffering caused by yesterday’s massive fire in the Kutupalong Balukali refugee camp in Cox’s Bazar.

Based on provisional reports, as of this morning (Tuesday 23 March), 15 refugees are confirmed to have tragically lost their lives in the fire. More than 560 have been injured and an estimated 400 people are still missing.

In support of the ongoing response led by the Bangladeshi authorities, UNHCR, in coordination with IOM and other UN and NGO partners as well as refugee volunteers, is rushing to provide critical support and protection to some 45,000 Rohingya refugees who lost their shelters and belongings in the devastating blaze.

At least 10,000 shelters are estimated to have been destroyed or damaged, but figures are expected to climb in the coming days as assessments continue. Refugees who have been displaced are being temporarily accomodated within the camp community.

With an unknown number of refugees having sustained burn injuries, UNHCR has provided medical supplies through ICRC in support of the management of burn patients. Emergency first aid including psychosocial support is also being provided. Health volunteers from the refugee community are helping to refer those in need of critical support services .

Rohingya refugees remain at the centre of the response and have been mobilized since the fire was brought under control last night. UNHCR is preparing to reissue registration documents to those who lost theirs in the fire.

So far, UNHCR has provided some 3,000 blankets, 14,500 solar lamps, 10,400 kitchen sets and 11,500 mosquito nets. Together with Oxfam, it has also made available emergency water and sanitation assistance, including construction of 20 emergency latrines, emergency tap stands, water tanks, jerry cans and water purification tablets. Four water tankers are delivering safe water to areas where those displaced by the fire are congregating.

Using UNHCR’s Interactive Voice Response system, we will be able to call approximately 70 per cent of households in the most affected camps. UNHCR teams are monitoring the safety and security of temporary shelters for those displaced, and ensuring assistance meets the critical needs including for unaccompanied and separated children.

UNHCR 2021 appeal for Rohingya response totaling US$ 294.5 million is currently only 16 per cent funded. The effects of Monday’s lethal and destructive blaze will only exacerbate critical needs and further strain already overstretched resources. UNHCR is appealing for urgent mobilization of government and private sector donors. Their timely contributions are critical for the ongoing humanitarian response and UNHCR’s capacity to protect and assist both the Rohingya refugees and their Bangladeshi hosts.