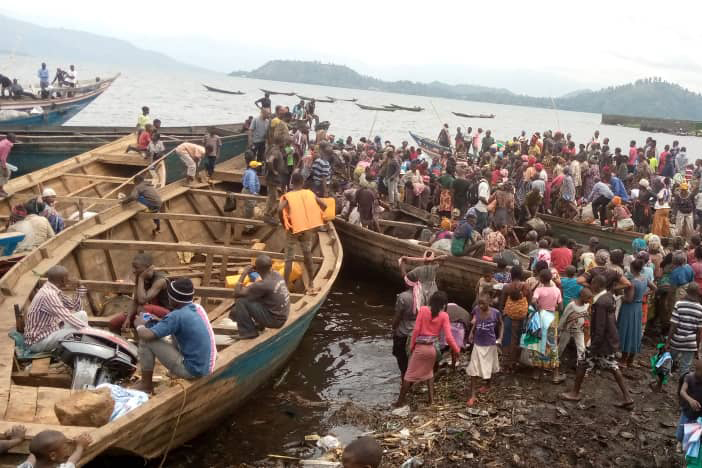 People displaced from the eruption of Mount Nyiragongo volcano arrive at the Kituku Port in Goma after fleeing from Kalehe district. © IOM/Anshobozize Gubanja Anatole.

The eruption of Mount Nyiragongo volcano has forced more than 415,000 people, nearly half of whom are children, to leave Goma, according to thousands of individual assessments carried out by the International Organization for Migration’s (IOM) Displacement Tracking Matrix.

An estimated 86 per cent of the internally displaced, 114,000 people, have moved to Masisi; a further 77,000 have travelled to Rutshuru. Roughly 52,000 people have crossed the border into Rwanda.

IOM’s data collectors have spoken to 6,000 people around the affected area. They report that an estimated 47 per cent of those on the move are under the age of 18, and approximately 58 per cent are female.

IOM classifies at least 28 per cent of the displaced coming from vulnerable groups. This includes children under five, breastfeeding women, the chronically ill, pregnant women, unaccompanied children, elderly people and those with mental health issues and physical disabilities.

Displaced persons have fled mainly on foot but also by boat, vehicles, motorcycles, buses and trucks.

“People are still mobile, with some leaving and a small number returning to the city,” said Fabien Sambussy, IOM Chief of Mission in the Democratic Republic of the Congo.

“Should the displacement last, it is essential that we consider how we are going to prevent the spread of epidemics, facilitate humanitarian assistance and send children back to school.”

IOM is particularly concerned by the health hazards linked to the eruption itself, the displacement to areas with pre-existing outbreaks, the lack of access to clean water and the increased burden placed on health facilities.

To address the risk of outbreaks – in particular cholera – and mental health and psychosocial needs, IOM is boosting disease surveillance efforts among displaced and host communities, looking for ways to scale up services, and supporting health facilities through donations, trainings and more.