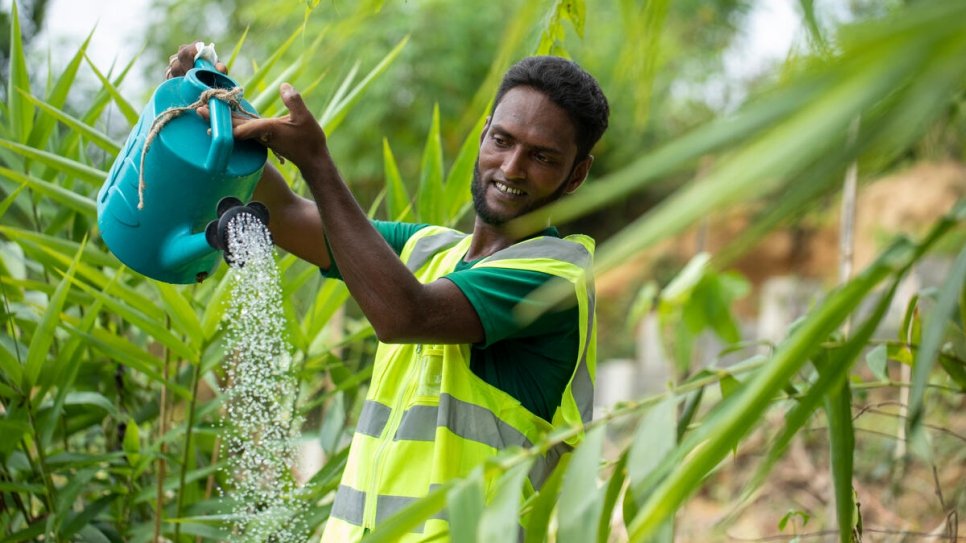 Mohammed Ali, 28, is a Rohingya refugee who has been working as a plantation guardian for the past three years, helping to green the world’s biggest refugee camp.

His tasks include watering and caring for seedlings, replanting trees ripped out by landslides, and raising awareness in his community about the need to protect the forests in this lush corner of southern Bangladesh.

The sprawling, densely populated camp is home to some 900,000 refugees, the majority of whom arrived in 2017 after fleeing violence and human rights abuses in Myanmar. In response to the influx over a period of just a few months, the Bangladeshi government allocated a 2,500-hectare sweep of protected forest to expand an existing settlement.

Vegetation was cleared to make way for shelters and infrastructure. Lacking alternative cooking fuels, refugees cut many of the remaining trees for firewood. What had been a sanctuary for wildlife, including endangered Asian elephants, quickly became a bare, hilly tract of bamboo and plastic-roofed shelters that was prone to flooding and landslides in the monsoon season.

“This place was like a desert; there were no trees.”

The risks from such events are on the rise. Bangladesh has always been buffeted by tropical storms and flooding, but climate change is increasing the frequency and intensity of cyclones that threaten both Bangladeshis and the Rohingya refugees living in the hastily constructed settlements in Cox’s Bazar District.

Between June and October, torrential rains batter the camps, collapsing hillsides, submerging makeshift shelters, and displacing the refugees once again. This year alone, some 24,000 refugees were forced to abandon their homes and belongings and 10 refugees lost their lives during particularly heavy rains in late July.

To reduce these risks, UNHCR and its partners set out in 2018 to restore the forest ecosystem and stabilize hillsides through a project to plant fast-growing indigenous species of trees, shrubs and grasses. More than 3,000 Bangladeshis and Rohingya refugees have received training on how to manage tree nurseries, plant and care for seedlings, and protect the young trees.

Before the re-greening project started, Mohammed Ali recalls, “this place was like a desert; there were no trees. We had to tolerate overheating in the daytime, which also caused skin damage.”

Three years on, the refugees have replanted an area of more than 600 hectares – nearly twice the size of New York’s Central Park. Grasses have also been planted in streams to help treat wastewater and reduce pollution levels.

“After three years you can see the camps are so green,” says Abdul Maleque, who works with UNHCR’s energy and environment unit in Cox’s Bazar.

“The insects, pollinators and other wildlife are coming back. Trees are providing shade; and refugees are enjoying better living conditions. Now, our target is to protect the existing greenery. For that, we are trying to engage more refugees to protect the trees,” he explains.

While he believes they have made a good start, Ali agrees that planting the trees is not enough. “We must take care of them too,” he says. “We try to protect the trees from any harm. If someone tries to destroy the trees, we convince them otherwise.”

“Because I take care of these trees, I am at peace.”

The reforestation project’s success has hinged to a large degree on the roll-out of Liquefied Petroleum Gas (LPG) to refugees and local community households as an alternative to firewood, which refugees were stripping from the surrounding forest at a rate of 700 tonnes a day to meet their essential energy needs.

“All that firewood came from the nearby forest. If this trend continued, the rest of the forest could have vanished in one year,” says Maleque.

Three years after its initiation, 100 per cent of refugee households now use LPG. Since its uptake, refugees – often women and children – do not have to make long, dangerous treks into the forest to collect firewood. Furthermore, families no longer cook in smoky conditions that triggered coughs and left eyes smarting.

The focus now, says Maleque, is to reduce the amount of LPG that refugees need. A pilot project supported by UNHCR has begun distributing pressure cookers to refugee households. The cookers reduce cooking time and the amount of gas used, although more funding is needed to ensure every family has one.

Worldwide, UNHCR is committed to helping displaced people and their host communities prepare for and adapt to the impacts of climate change.

The reforestation project together with work on clearing and restoring waterways and improving drainage systems has helped reduce the affects of flooding in the camps, says Maleque.

“When strong storms occur, there is still flooding but the water flows out quicker in rehabilitated areas and therefore helps mitigate the impact,” he explains.

Plans to further restore the local ecosystem, stabilize hillsides and reduce carbon emissions will require more time and funding. But for Ali, the benefits are clear.

“Because I take care of these trees, I am at peace,” he says. “One day, when I return to my country, I will look after the trees there and I will convince people to take care of them too.”

Learn more by watching the video in the original article here.