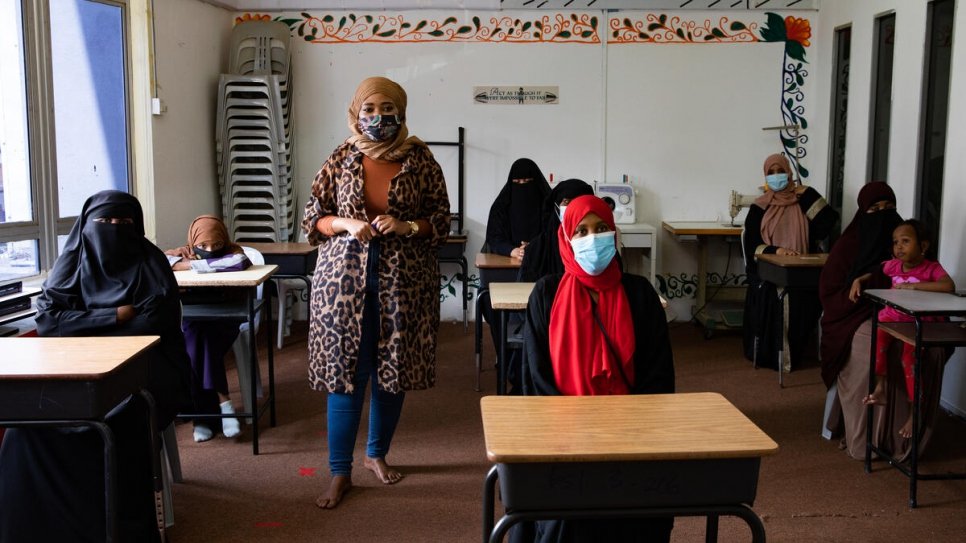 Forcibly displaced women are often best placed to lead interventions on gender-based violence and other issues affecting their communities. All they need is support and resources.

When Deborah was subjected to domestic violence, she told no one.

Within her community of refugees from Myanmar, living in Malaysia’s capital, Kuala Lumpur, violence against women in the home was considered a family problem.

“I felt ashamed to share my experience with other people,” she recalls. “I was afraid they would say it was my fault.”

But through her work with the community-based Myanmar Ethnic Women Refugee Organization, she met other women suffering in silence, and when she was invited to help devise and lead a project to support refugee women affected by gender-based violence, she accepted.

Asking refugee women to identify solutions to the problems that affect them and partnering with them to implement those solutions may not sound ground-breaking. But according to Adjunct Associate Professor Eileen Pittaway of the Forced Migration Research Network at the University of New South Wales (UNSW) in Sydney, Australia, it is only recently becoming the norm.

In the past, she says, “refugee women were seen as vulnerable or helpless, and this was reflected in the media and in fundraising campaigns. In fact, they are strong protectors of their families and communities.”

The Global Compact on Refugees, affirmed by the UN General Assembly at the end of 2018, included commitments by States to support gender equality and refugee women’s leadership, but translating those commitments into actions and predictable resources remains a work in progress.

“In some places, there’s an idea that the only way you can address gender-based violence is to parachute in Western-trained experts, whereas refugee women themselves can respond,” says Pittaway.

That is now changing. Forcibly displaced women are increasingly leading activities and interventions, with NGOs and humanitarian partners providing funding and training when needed.

“They tell us, ‘You don’t have to do it for us, you just have to give us the resources and we can do it ourselves,’” says Pittaway.

She and her colleague at UNSW, Dr Linda Bartolomei, have been supporting refugee women to “do it themselves” for over 20 years, following their experience working with women living in camps at the Thai-Myanmar border in the 1990s.

“These women said they’d work with us on the condition that we involved them with any research we did. They wanted anyone who participated [in the research] to know that they would get something back, and what they wanted was human rights training,” recalls Pittaway.

She and Bartolomei designed a training module for the women and, in the process, developed a methodology – Reciprocal Research – that aims to ensure refugee women and girls participate in the design and implementation of programmes meant to support them.

Their current 3.5 year project, Refugee Women and Girls: Key to the Global Compact on Refugees, funded by the Australian Government and run in partnership with refugee women’s organizations, local NGOs and academics, and the UN Refugee Agency, UNHCR, is supporting refugee women-led interventions to respond to gender-based violence in Malaysia, Thailand and Bangladesh.

The need for such local, refugee-led projects has become even greater during the COVID-19 pandemic, as lockdowns have taken away refugees’ often precarious livelihoods, heightening tensions in households and making it more difficult for international agencies to deliver support services.

The first phase of the project involved in-depth consultations with refugee women leaders like Naima and Deborah who were already on the frontline of COVID responses in their communities. “They identified problems they were facing and proposed workable solutions,” explains Bartolomei.

The women then received training and funding to run projects responding to gender-based violence and COVID-19 in their communities.

“They could use the funding to address what they saw as priorities,” says Pittaway.

In Malaysia, Naima, Deborah and 14 other women representing seven diverse refugee communities were employed as community focal points to run online support groups that provide a safe space for women to open up about their experiences of gender-based violence.

“If I don’t stand up and talk about my experience, how am I going to help my fellow refugee women?”

Those experiences extend beyond violence in the home. They include being forced into marriages, being sexually exploited or abused by landlords and employers, and risking violence while selling sex in order to feed themselves or their families.

Deborah shared her own experience to gain the trust of the women in her group.

“At first, it was very difficult … but I know if I don’t stand up and talk about my experience, how am I going to help my fellow refugee women who do not know where to share their problems,” she says.

In the Rohingya refugee camps in Bangladesh, women who were providing support to survivors of gender-based violence requested more training so they could advocate on their behalf with the mainly male heads of camp committees.

And on the Thai-Myanmar border, refugee women who were already running support services and safe houses for survivors of gender-based violence asked for funding to provide food to families who had lost livelihoods due to COVID. The financial stress and lack of food in households was putting women at greater risk from violence at the hands of their partners.

In Kuala Lumpur, the online support groups help address what Deborah describes as a severe lack of services for women and girls in her community. Other community-based organizations are mainly led by men, she says. “They don’t include females in making decisions, and they say gender-based violence is just women’s issues.”

The UNSW project is due to end in early 2022, but it is hoped that additional funding will allow it to be extended for at least a further three years. An evaluation of its first phase found improvements in creating safe spaces for reporting and making referrals of refugee women and girls subjected to gender-based violence in all three countries. Refugee women leading the projects also reported a significant increase in feeling that they were being listened to and respected.

“I’m not used to my voice being heard,” says Naima. “But by sharing our perspective and what we do, I think it’s a very good beginning.”