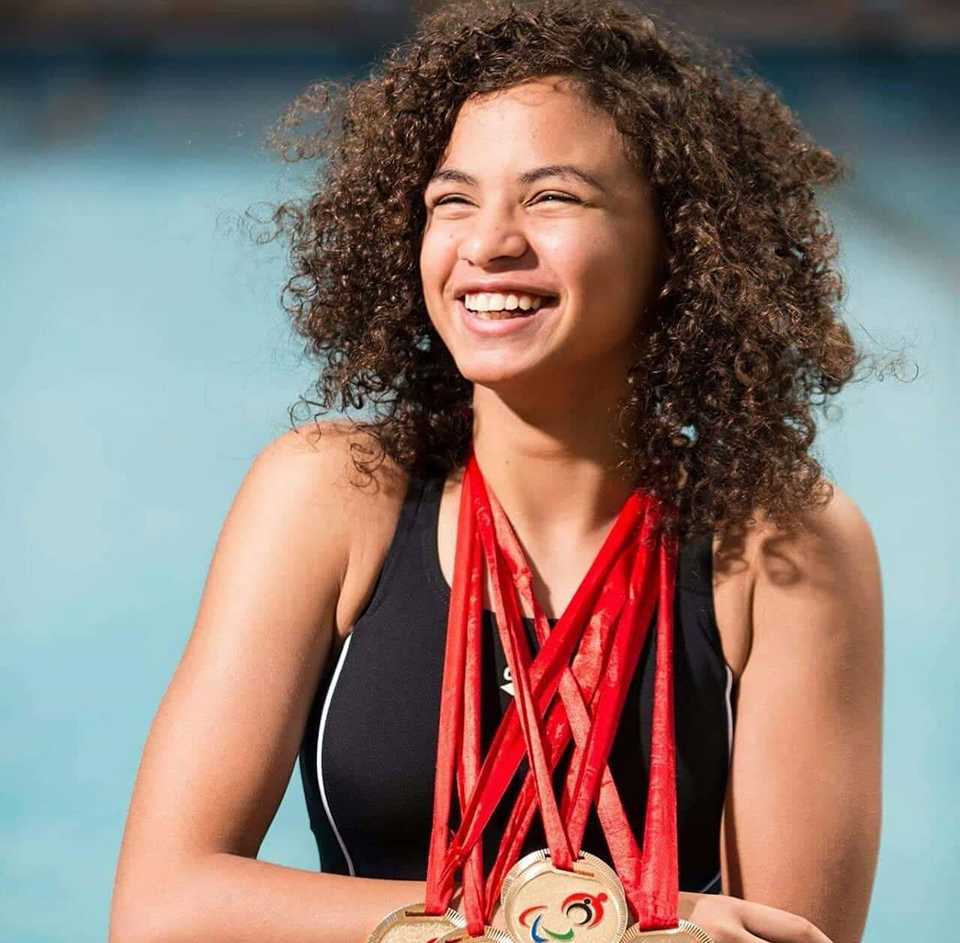 Women in sport are changing the game

As the Tokyo 2020 Olympics kick-off on 23 July 2021, almost 49 per cent of participating athletes will be women, making it the most gender-balanced Games in history. All 206 National Olympic Committees also have at least one female and one male athlete representative. This marks a landmark for gender balance in sport – a powerful means of empowering women and girls.

Sport mobilizes the global community and speaks to youth. It unites across national barriers and cultural differences. It teaches women and girls the values of teamwork, self-reliance and resilience; has a multiplier effect on their health, education and leadership development; contributes to self-esteem; builds social connections; and challenges harmful gender norms.

To celebrate women in sport, here are just a few inspirational women breaking down gender barriers all around the world.

Malak Abdelshafi is a 17-year-old Egyptian Paralympic swimming champion who qualified for the 2020 Tokyo Olympics. When she was 10 months old, she suffered severe spinal cord injuries from an accident that left her partially paralysed.

“I started swimming as hydrotherapy, since wheelchair-users usually need to maintain blood circulation,” says Abdelshafi. “I did not plan to swim professionally. During my hydrotherapy sessions, my trainer said I was talented and pushed me to compete.”

“My first championship was in 2012 with my club and I won a silver medal. I was 9 years old then and the youngest among the participants. We were all surprised and did not expect it at all. Since then, I decided to pursue a professional track in swimming. I joined the national team in 2014.” Abdelshafi has since won 39 national and six international medals.

“Nothing can stop us because we’re girls. We’re all human and there’s no difference between a girl or a boy. One of my favourite quotes is: ‘There’s always another way’. When you find out that the way to your goal is blocked, don’t give up. Try to find another way and you’ll reach your goal with your persistence.”

“I believe that sports can influence our behaviour and help us have a positive impact on others. I hope I can do this one day and be an inspirational model.”

Kathely Rosa, 19, pictured center with ball, with other graduates of the One Win Leads to Another programme in Brazil. Ⓒ UN Women/Camille Miranda

When Kathely Rosa,19, first shared her dream of becoming a professional football player, people around her said football was for boys. When she tried to play with the boys, they refused and would only allow her to watch. Her brother, four years younger, had a completely different experience, and took football lessons from an early age.

“He had a ball, a complete uniform, the opportunity to train at a club, money to participate in championships and selection processes. I got nothing,” says Rosa.

“I learned football mainly from male figures, because women’s football is not that visible,” says Rosa. “I was just fascinated when I saw what Marta could do with a ball.”

In February 2020, Rosa, along with 15 girls from One Win Leads to Another (OWLA), a joint programme with UN Women and the International Olympic Committee that provides weekly sport practice and life skills sessions for adolescent girls, fulfilled another dream ­– she met Marta in person in Rio.

“Marta told me that if I truly believe in what I want to do, nothing is impossible,” says Rosa. “It may sound like an obvious advice, but I needed to hear that from her.”

“I will graduate, become a coach and create a female’s football team with girls from the favela. There are a lot of girls with so much talent. They just need to be properly trained,” says Rosa. In the meantime, Rosa continues to lead by example in her community, as the only girl who plays on the boys’ team.

Anita Karim poses at the gym where she trains in Islamabad; this photo was taken on 21 February 2021. Ⓒ UN Women/The Centrum Media

Anita Karim, 24, is the only woman among the more than 300 professional mixed martial arts (MMA) fighters in Pakistan.

“I understand how significant confidence and knowledge of self-defence are for girls,” says Karim. “I started training in mixed martial arts and I wanted to become an example for other girls to encourage them to join a sport like MMA that makes individuals healthy and active.”

Karim comes from a family of MMA fighters and trains at an MMA training centre founded by her brothers in Islamabad. Her first professional fight was in 2018. “My family always supported me and encouraged my enthusiasm towards MMA, which is why I have accomplished so.” says Karim.

“We get the message from our society that women and girls can’t commute on their own or can only work in particular areas. We are taught to fear, and there is a perception that girls are weak and vulnerable, which makes it difficult for us to move forward. When we go out and encounter harassment, we get frightened and are unable to react. MMA has taught me confidence and also made me strong enough to compete at a global level. It has taught me strategies for protecting myself in any kind of difficult situation.”

Khadija Timera, a lawyer and boxer from Senegal

Khadija Timera, 35, was raised in a working-class district in Paris. She won a scholarship to study business law at the University of California, Berkeley, and has worked in one of the world’s top law firms.

“After graduating, I felt that I had achieved a challenge,” says Timera. “I wanted to create my own company to support high-level sportswomen, specifically soccer players.” Now, Timera runs a London-based business and investments consultancy for professional athletes and is also a boxer, who advocates against gender-based violence. She narrowly missed out on qualifying for the Tokyo Olympics.

“I made my first selection in 2019. We went to the African championship in Cabo Verde and I won the gold medal for Senegal,” says Timera.

“Violence against women is regrettable. Women and children in Senegal are vulnerable and should therefore be protected.”

“People need to become [more] aware that women and men are equal and complementary. I also think that women themselves have to realize that they have a real power that they send out; they have to learn to trust themselves.”

“Boxing can help to build confidence,” Timera adds. “There should be many more associations and action to help women recognize their personal value and learn self-development.”

To women, Timera says: “you are enough.”

Aizhan Alymbai Kyzy is a 26-year-old chess champion from Kyrgyzstan. She has been a member of the national team since she was 15 years old, and came third place in the Asian Rapid Chess Championship.

“In Kyrgyzstan, as in the rest of the world, chess is mostly male dominated,” says Kyzy. “Monetary awards for women at the Kyrgyz championships are almost half of what men are offered and mostly men participate in these tournaments. The situation is changing for the better now.”

Kyzy believes the world is heading towards equality and that families have a significant role to play in supporting their daughters.

“We can be the ones to push the boundaries of what is possible,” says Kyzy. “At chess academy, where I was teaching, we demanded equal performance both from girls and boys. But parents urged teachers to be less harsh on girls. We need to raise awareness on ensuring quality education for girls and encourage families to support their daughters.”

“In the modern world, creative thinking and analytics are highly valued, and this is exactly what chess can offer. I want to be a role model for other girls. Playing chess is empowering, self-fulfilling, and makes you realize that everything is possible. Our society needs to create an enabling environment for women’s empowerment in sports and beyond. I call on all women and girls to challenge gender stereotypes, smash the boundaries and keep realizing their dreams!”