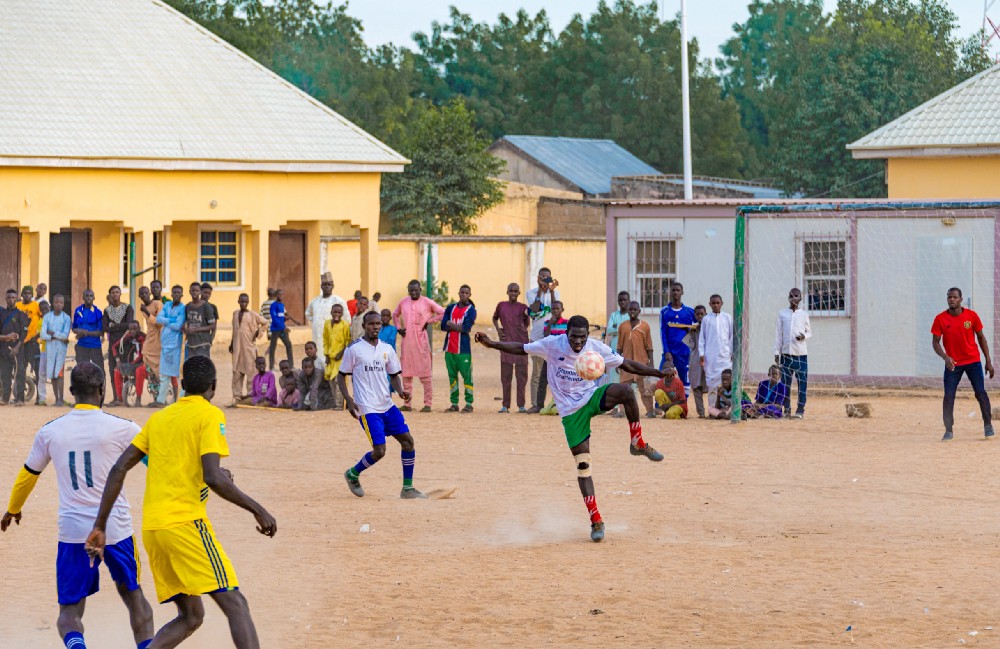 In 2014, Mohammed Umaru fled his hometown, Bama in Borno State after an insurgency struck the northeast of Nigeria. His two younger brothers and mother were abducted, and he also lost his means of making a living.

With peace beginning to return, Mohammed journeyed home to start afresh with the hope of being reunited with his family. On return, he met other people from different tribes and backgrounds staying in one of the internal displaced camps set up by the government.

“When I first came back to my community and saw new people, I felt quite uneasy,” he said.

In the camps people of different tribes, origins and backgrounds are living together. With a lot of unknowns about each other’s cultures and way of life, tensions and misunderstandings have been frequently sparked between both the host community members and the displaced and within the displaced community itself, preventing groups from building mutual trust and respect. The volatile security situation remains a predominant concern, with the risk of outbreak, escalation, or recurrence of inter-community conflicts.

Mohammed, still trying to process the abduction of his family, had more than enough to deal with.

“I do not sleep well at night and I have this built-up anger within me and sometimes we pour the anger on the displaced people at any slight opportunity.”

UNDP under the Support to Reconciliation and Reintegration Project funded by European Union has begun a community-led “Peace through Sports Engagement” in places hit hardest by the insurgency. The aim is to strengthen social engagement and rebuild intercommunal trust.

UNDP under the Support to Reconciliation and Reintegration Project funded by European Union has begun a community-led “Peace through Sports Engagement” in places hit hardest by the insurgency. The aim is to strengthen social engagement and rebuild intercommunal trust.

The programme provides 500 young people from camps and the host community in Bama an opportunity to train and play in football tournaments that build fitness, improve their mental health, address frustrations, provide team building and community spirit to diffuse the tensions that can often lead to conflicts.

Before the programme Mohammed didn’t mix with others, preferring to stay with friends from his own community.

“We never trusted the new people that came in because we thought that most of them are here to constitute a nuisance or cause us more harm,” he says. “This Peace through Sports Programme came at the right time.”

Each team mixes players from the host community and the displaced and through it Mohammed learned that he didn’t have to be suspicious of people who weren’t from his own community.

“We started a match tournament and it brought about trust and unity, because you must rely on your teammate for a good performance, so it made me to trust other people and relate well with them,” he said.

People from different communities also clash because they do not know how to relate to experiences that are different from theirs. At the community level, sport has been a tool used to encourage strong community bonds, promote social cohesion, and reduce crime rates. This programme also provides positive diversion for young people to express themselves and build pro-social, leadership, dialogue and conflict resolution skills. The United Nations recognizes sports as critical to health and wellbeing but also having the power to change perceptions, prejudices, and behaviour, combat discrimination and defuse conflict.

The project is helping people rebuild intercommunal trust, heal from the effects of the conflict, and cultivate tolerance, all critical component of social cohesion. The EU supported project aims to enhance stability through provision of alternatives to violence and enhanced social cohesion and is implemented as a partnership between the UNDP, IOM and UNICEF in Borno, Adamawa and Yobe States.

Mohammed is grateful for the chance to both demonstrate his skills and to forget, even for a short while about the trauma he and his family are facing.

“Right now, I am the highest goal scorer, and I am so happy. People in the community gather to watch the tournaments and deliberate on the match performances, which has helped to strengthen cooperation and build mutual trust. Even though I still think of my mother and brothers, I feel much better with this programme, I have less built-up anger because sports has helped me to relax my mind and feel freer with other people.”

Story and photos by UNDP Nigeria.