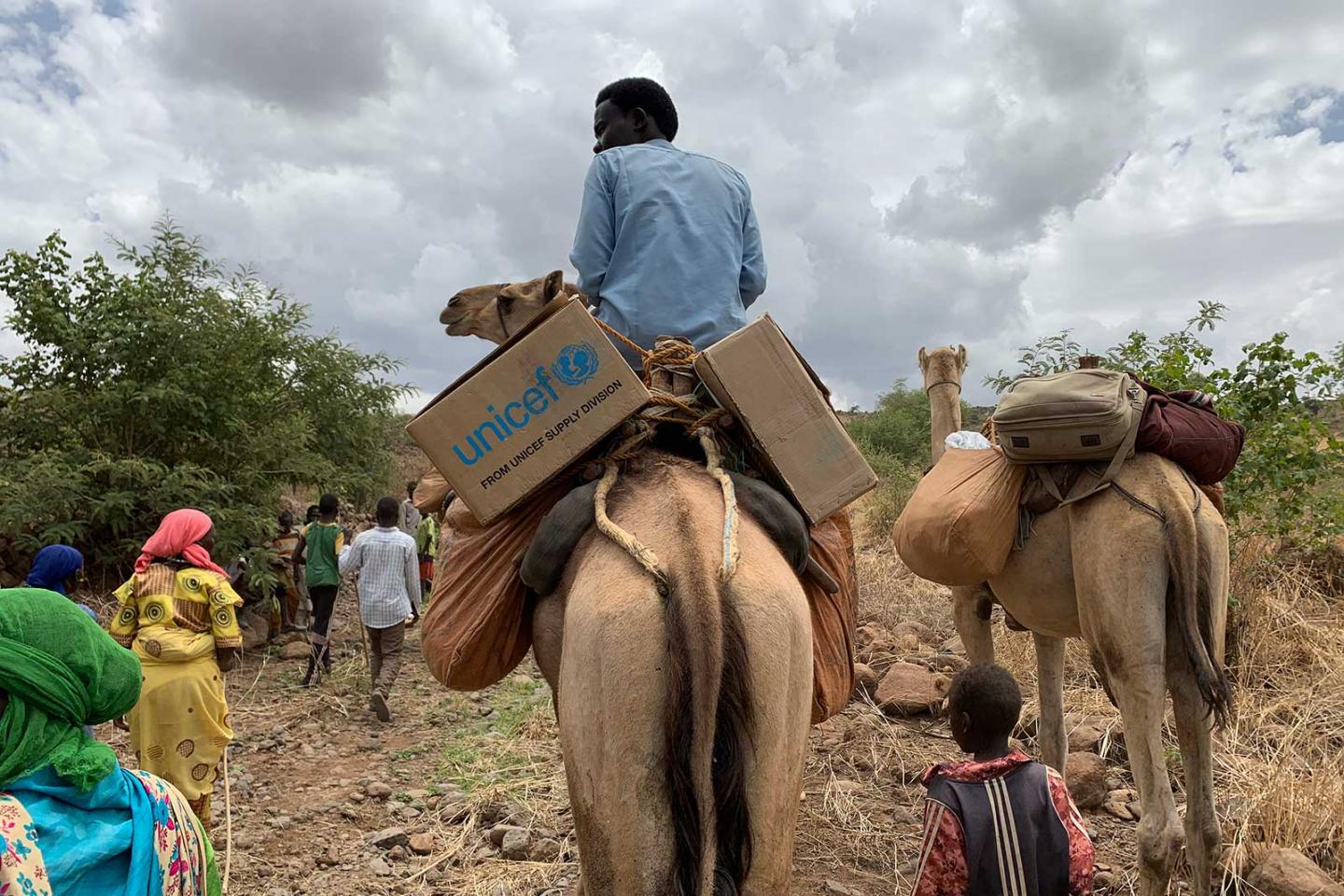 Beyond COVID-19: Responding to protracted emergencies

Despite the intense pressure on staff and systems and unprecedented disruptions to global freight networks in 2020, UNICEF maintained its regular supply operations for children and continued responding to ongoing, concurrent emergencies, beyond COVID-19. Working with governments, partners and suppliers, UNICEF reached children and communities affected by protracted conflicts, displacement and outbreaks with the supplies they need to survive and recover throughout the year.

The UNICEF supply and logistics response for the highest-level emergencies in 2020 is described below.

During a year in which Yemen spiraled ever deeper into a brutal civil war, UNICEF Supply Division’s work for children was more critical than ever. The plight of some 4.4 million people, including 1.7 million children, displaced by conflict or other causes was of particular concern. Among the strategies employed was the Rapid Response Mechanism, which delivered packages of vital food, hygiene and other supplies to more than 645,000 people.

Despite severe operational challenges resulting from the conflict, UNICEF supplies helped many of Yemen’s neediest families. Safe water was delivered to more than 2 million children through a combination of water trucking and the repair and installation of pumping systems and water points. Around 26 million doses of vaccines were procured, delivered and distributed around the country along with solar-powered refrigerators to support the vaccine cold chain. Special therapeutic food products treated around 230,000 young children suffering from Severe Acute Malnutrition.

Even as the effects of the five-year long conflict worsened, Yemen was also grappling with the COVID-19 pandemic. By late August 2020, UNICEF had provided masks, gowns and other personal protective equipment (PPE) items sufficient for 20,000 front line health workers to ensure the continuity of health and nutrition services for the next six months.

The Democratic Republic of the Congo and the surrounding region

Amid efforts to end a series of Ebola outbreaks and a burgeoning response to the COVID-19 pandemic, simple infection prevention and control materials such as soap and water containers comprised an important part of UNICEF Supply Division’s contribution to tackling the complex humanitarian emergency in the Democratic Republic of the Congo (DRC).

In eastern areas of the country, Ebola and COVID-19 have compounded the suffering of more than 3 million children and their families forced from their homes and livelihoods by violence involving armed militia groups. Key to the UNICEF efforts to provide these children with emergency assistance has been the Rapid Response initiative, which provided lifesaving emergency packages of water and sanitation supplies, cooking utensils and other non-food items to nearly 550,000 people.

With many clinics and staff unable to function due to the security situation and other factors, providing vaccines and other supplies for the most vulnerable children was a high priority. As a result, over half a million children in DRC aged 6 months to 14 years were vaccinated against measles, and over 380,000 children aged 6 to 59 months affected by Severe Acute Malnutrition had access to treatment.

Besides concluding a brutal decade of conflict in Syria, 2020 witnessed a further aggravation of the scale, severity and complexity of the humanitarian needs of Syrian children and their families.

A downturn in the economy and rising prices of food and other basic commodities, compounded by the socio-economic impact of COVID-19 and ongoing hostilities, produced devastating consequences particularly for displaced families and returnees in the northwest and northeast regions of the country.

In this bleak setting, with 4.7 million children in need of humanitarian assistance, UNICEF supplies played a critical part in providing some of the neediest with access to health, immunization and nutrition as well as scaled-up WASH and hygiene services. The overall volume of UNICEF-procured commodities rose significantly due to the addition of 26 million personal protective equipment (PPE) items in response to the COVID-19 pandemic. Those were predominantly procured locally. As in previous years, local procurement remained high, promoting sustainability and strengthening the humanitarian development continuum. Throughout the year, UNICEF supplies helped spare populations in conflict-affected areas from some of the effects of the destruction and lack of maintenance done to the national water and sanitation infrastructure. One example was the provision of sodium hypochlorite to ensure proper chlorination of water in all governorates, thereby contributing to preventing outbreaks of major waterborne diseases. In all, UNICEF assisted 3.3 million people whether through supplying safe domestic water, providing sanitation infrastructure maintenance, solid waste management, or provision of hygiene supplies.

UNICEF-procured supplies were central to the restoration of primary health care facilities in six governorates. Thirty-six prefabricated clinics were installed to serve communities severely affected by the conflict or in areas where no functional health centres previously existed. Reinforcing basic health facilities in this way had significant health benefits for children – for example, by facilitating polio immunization efforts that reached 2.6 million children and the distribution of micronutrients to 1.6 million children as well as pregnant and lactating women.

The humanitarian crisis in the Central Sahel countries of Burkina Faso, Mali and Niger deteriorated rapidly in 2020, amid unprecedented levels of armed violence, rights violations and displacement exacerbated by the consequences of climate change. Over 7 million children now depend on humanitarian assistance, of whom 1.24 million have been displaced from their homes. The deteriorating situation was particularly evident in Burkina Faso whose displaced population increased by 70 per cent during the year. The onset of the COVID-19 pandemic added another layer of complexity to the task of delivering life-saving supplies to children in a highly insecure region. Even so, UNICEF supplies continued to make an important difference to children’s lives.

In Niger, the Rapid Response Mechanism (RRM) was in frequent demand to meet the acute multisectoral humanitarian needs in the very first hours after displacement. From January to December 2020, through the RRM, UNICEF provided tarpaulins, water and sanitation supplies and other non-food supply items to more than 14,000 affected households.

Mali faced a different kind of challenge in an epidemic of a circulating vaccine-derived poliovirus type 2 (cVDPV2) that produced 31 confirmed cases. Amid fears of the virus spreading rapidly, UNICEF joined the Government and Global Polio Eradication Initiative Partners to implement a mass immunization campaign that reached over 3.6 million children under 5 years old.

In Burkina Faso, as across the region, schools closed to counter the spread of COVID-19. In partnership with nine international and national non-governmental organizations and government authorities, UNICEF supported the enrolment of over 230,000 children through the creation and rehabilitation of Temporary Learning Spaces in the form of tents to serve as classrooms in host schools. UNICEF also procured and distributed essential educational supplies.

Bolivarian Republic of Venezuela and the surrounding region

More than 5.4 million Venezuelans left their country in one of the world’s largest migration crises. Most of them now live within the region, with the largest populations in Colombia, Peru, Ecuador and Brazil.

In 2020, UNICEF’s response stretched across five countries, reaching over 885,000 people and 525,000 children from migrant and host communities. The delivery of supplies and services to key sectors such as health, water, education and nutrition was adjusted to comply with COVID-19 containment measures.

Within Venezuela itself, the response to COVID-19 dominated UNICEF’s work for children. UNICEF brought in and distributed more than 1,800 tons of supplies, including 2.8 million gloves and other items. Around 300 tons of health, water, sanitation and hygiene supplies were delivered by air as efforts to control the virus intensified.

Across the region, UNICEF prioritized its work in five countries containing 77 per cent of the population in need. In Colombia, primary health care and services such as micronutrient supplementation were maintained. WASH activities were refocused with more emphasis on the distribution of supplies, alongside promotion of handwashing and service provision. In Ecuador, UNICEF worked alongside partners towards a gradual and safe reopening of schools. Supplies comprised an important element of the strategy, which involved the improvement of toilet facilities, installation of handwashing stations and improved hygiene conditions.