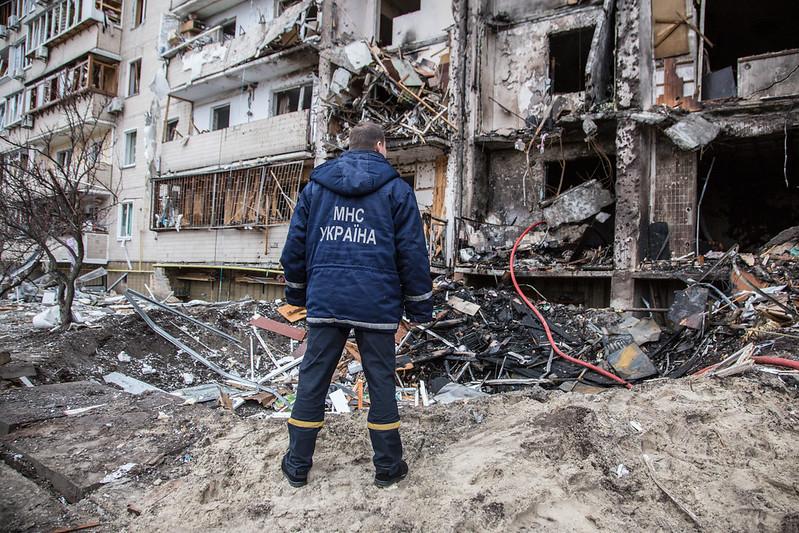 What Ukraine shows us about working together

The unfolding human tragedy in Ukraine has thrown into sharp relief the need to effectively tackle the overlapping crises we face.

As a popular movie trope goes, the call is coming from inside the house.

The COVID-19 pandemic has shown us that no crisis exists in isolation. Just as the toll of epidemics is not confined to lives lost, wars are not paid for only in blood. We have seen how the pandemic has fed social and economic chaos and punished the most vulnerable.

And Ukraine, a stable and productive country, despite challenges, which had been enjoying nearly two decades of increasing wellbeing, now faces the horrific prospect that nine out of 10 of its citizens could be plunged into poverty or near-poverty.

This in the space of little more than eight weeks.

This is not just Ukraine’s problem. The broader geopolitical and economic fallout poses serious risks to global peace and development.

Already major policy shifts are being made with potentially significant implications for international development finance and aid.

Countries are increasing their military spending as yet another refugee crisis evolves.

Germany, Sweden, Denmark, and Poland have announced a raise in defence spending to or above two percent of GDP. Denmark and Sweden have also reduced 2022 aid budgets to cover the costs of receiving Ukrainian refugees.

The ripple effects from the Ukraine crisis on commodities and energy are spreading far beyond the conflict zone. Higher gas prices will also put oil importing developing countries at risk of economic hardship and recession and could fuel instability and unrest.

We estimate that about 1.7 billion people in 107 countries are severely exposed to either rising food or fuel prices and have governments struggling to pay their debts.

And let’s not forget that Russia and Ukraine feed the world. Together they account for 30 percent of the world’s wheat and barley exports and about half of its sunflower oil, so the conflict also threatens an international food crisis.

Cascading further downstream, this is going to hurt countries, particularly those that are the most vulnerable, such as Yemen, Afghanistan, Somalia, South Sudan and Myanmar, as the development finance pie gets sliced even more thinly.

A year ago the Inter-agency Task Force on Financing for Development warned of the risk of a diverging world—where the rich get richer and the poor get poorer—that could lead to a lost decade for sustainable development. Now, at the halfway mark of the 2030 Agenda, divergence is growing ever more alarming.

The “great financial divide” is alive and well because rich countries have been able to borrow money cheaply to tide them over the pandemic. Despite international support, poor countries have not had that luxury. A key takeaway from the report is that unless the international community reverses course, this divergence will persist, and may intensify.

How do we adjust to a new reality and approach these new challenges in an increasingly complex and interconnected world that gets hotter, and more damaged by the climate emergency every year?

The challenges we face now are different from those of 1945 but the concept remains the same.

We have proven that effective answers to these modern challenges cannot be achieved by nations alone. Common sense dictates that multilateralism and development cooperation are our only option.

How do we do this?

UNDP is deeply committed to our ‘stay and deliver’ policy in countries that too often get overlooked when the news cycle moves on.

Fragile and vulnerable countries need our help, but that help should be specifically designed to enable them to help themselves. Development cooperation, solidarity and multilateralism should all be focused on the outcome of placing countries in charge of their own destinies.

Our hearts are broken by the tragedy unfolding in Ukraine. We stand with Ukraine and we will do so in the future. We are not going anywhere.

We also understand that Ukraine, like every other country we work with, knows what’s best for them. They are in the driver’s seat and our assistance serves to support and collaborate with them to meet the goals and aspirations that they themselves have chosen.

In some ways it’s quite simple. If we look with clear eyes at the challenges we face, the conclusion is inescapable.

We—all eight billion of us—live together on just one planet that we cannot escape and that desperately needs us to change direction.

So we must start acting like it, working as one to design policies and assign financial priorities that reflect this reality.

Our way forward must be built on shared goals and a common vision for our people, every single one of us, no matter where we live, and, to borrow from the physicist Carl Sagan, to protect the “pale blue dot, the only home we will ever know.”