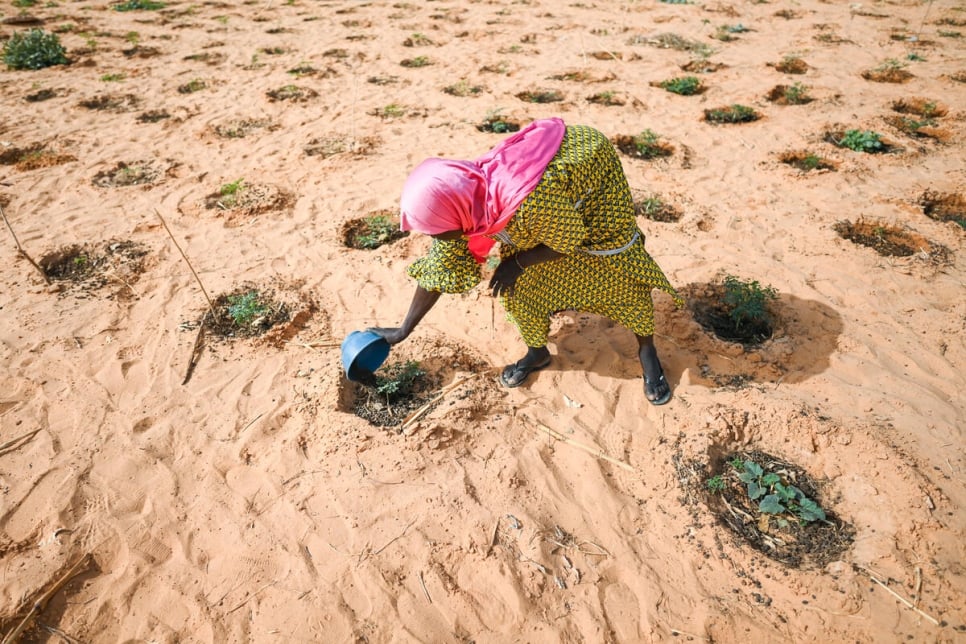 A woman waters vegetables in a market garden established on formerly degraded land in Ouallam, Niger. The garden is shared by refugees, internally displaced people and locals. © UNHCR/Colin Delfosse

Without urgent investment in climate mitigation and adaptation, countries in the Sahel risk decades of armed conflict and displacement exacerbated by rising temperatures, resource scarcity and food insecurity, the UN Special Coordinator for Development in the Sahel and UNHCR, the UN Refugee Agency, warned today.

According to a report published today, “Moving from Reaction to Action: Anticipating Vulnerability Hotspots in the Sahel”, left unchecked, the climate emergency will further imperil Sahelian communities as devastating floods, droughts, and heatwaves decimate access to water, food, and livelihoods, and amplify the risk of conflict. This will ultimately force more people to flee their homes.

“In the Sahel, the climate crisis is combining with increasing instability and the low level of investments in development to create a disempowering mix that is heavily taxing Sahelian communities, with the added risk of jeopardizing the attainment of the Sustainable Development Goals,” said UN Special Coordinator for Development in the Sahel Abdoulaye Mar Dieye. “There are solutions, focused on people’s agency and investments at scale, but they require resolute commitment and dedication from all, as well as the right data and analysis to know what is coming in order to execute proactive and impactful policy responses.”

The report looks at the 10 countries covered by the UN Integrated Strategy for the Sahel and its Support Plan in West and Central Africa – Burkina Faso, Cameroon, Chad, the Gambia, Guinea, Mali, Mauritania, Niger, Nigeria, and Senegal.

Communities across the Sahel rely on farming and pastoralism, which are highly vulnerable to the impacts of climate change. Food insecurity is already surging across the region, reaching emergency levels in some areas. In the long term, yields of maize, millet and sorghum are projected to decline due to climate shocks, wearing down the resilience of local populations.

“Rising temperatures and extreme weather in the Sahel are worsening armed conflict, which is already destroying livelihoods, disrupting food security, and driving displacement,” said UNHCR Special Advisor for Climate Action Andrew Harper. “Only a massive boost in collective climate mitigation and adaptation can alleviate the current and future humanitarian consequences.”

Even with ambitious climate mitigation policies, temperatures in the Sahel are predicted to rise 2.5°C by 2080. If urgent action is further delayed, they could increase by 4.3°C.

Despite the negative trends, the Sahel is endowed with abundant natural resources.

The region sits on one of the largest aquifers in Africa and has immense potential for renewables, including abundant solar energy capacity, and a dynamic young population – around 64 per cent of Sahelians are under 25 years old.

If bold action in climate mitigation and adaptation is imminently taken to support Sahelian countries and communities, and collaboration across the humanitarian, development and peacebuilding pillars is prioritized, there is vast potential to change the region’s trajectory.