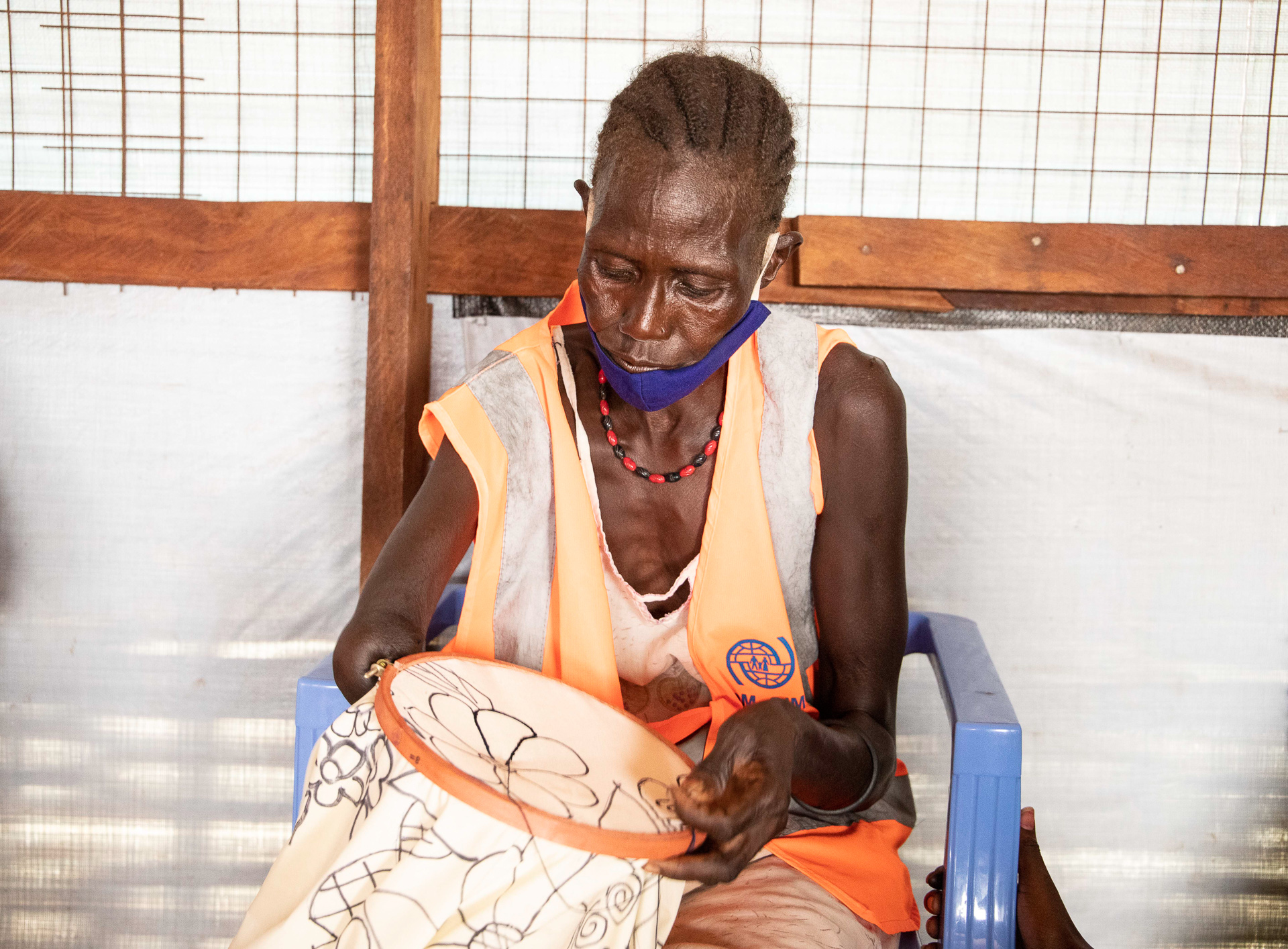 It is only the first day of training in hand-sewing and the women already have big plans about how they are going to use their newly acquired skills to support their families to gain independence.

“Once I get the hang of hand-sewing, I will learn how to sew with a machine. From there, I will make bedsheets, curtains and tablecloths to sell and use the money to provide for my children,” says 50-year-old Adut Akwar.

Adut and 14 other women from the Hai Masna Collective Centre, an internally displaced persons (IDPs) camp in South Sudan’s Western Bahr el Ghazal state, are part of the selected group to be trained by the International Organization for Migration (IOM) in an array of techniques including sewing, business and entrepreneurship as well as leadership skills. The group comprises women living with disabilities, young mothers and female-headed households.

Adut lives in Masna with her six children. They fled their home in 2017 when renewed fighting rocked their village in Jur River, forcing thousands of people, including women, children and the elderly to flee to save their lives. Many found refuge in Hai Masna (hosting 3,850 IDPs) and other collective centres around Wau, while the majority of the displaced sheltered at Naivasha IDP camp, formerly known as the UN Protection of Civilians (PoC) site in Wau.

She is among the 40 women from Hai Masna and Naivasha who have benefited from the training workshops through the Women Participation Project (WPP).  Through this project, IOM’s Camp Coordination and Camp Management (CCCM) team facilitates women’s access to income-generating activities through vocational and leadership skills training to support them to become self-reliant, encourage them to raise their concerns when they have them and take up leadership roles within the IDP camp and within their communities.

“I am very impressed by the enthusiasm that the women have shown in learning these skills which will help them in rebuilding their lives,” says Titus Muniri, IOM CCCM’s Community Participation Assistant.

“Some women who participated in previous trainings have even gone up and taken leading roles in the camp’s governance structures. We have four women who completed our training who were elected as members of the Community Leadership Committee (CLC) in Naivasha camp,” says Titus.

Adut Akwar says that she “has a plan.”

“When I return home, I will go back to ploughing my fields to grow food for my children,” she says.

“That’s not it though,” she adds with a renewed sense of excitement. “I will also use my time to sew bedsheets that I can sell to make an income.”

Adut says that she hopes that as peace holds in Western Bahr el Ghazal, more women will choose to leave the camps and return to their villages.

“When we leave, we can come together and form women-led cooperatives putting to use the business management and craft-making skills we learnt. We can make some real changes in our lives,” says Adut.

Adut, who was born with congenital upper limb reduction, says that she has never been one to depend on others to do things for her because of her disability.

“I guess, being born with a disability, you are also born with an inherent sense that you have to push harder to show the world that you can,” says Adut. “That is why when I was selected for the workshop, I did not think twice about joining.”

The women support each other. © IOM 2021/Liatile Putsoa.

“Sure, I may need help putting the thread through the needle, but the rest I can learn and do by myself,” says Adut.

The Women Participation Project (WPP) is supported by the US State Department’s Bureau of Population, Refugees, and Migration (PRM) under the global “Safe from the Start Initiative” through which IOM’s CCCM team facilitates women’s access to income-generating activities.

To find out more about the Women’s Participation Project, visit https://womenindisplacement.org/