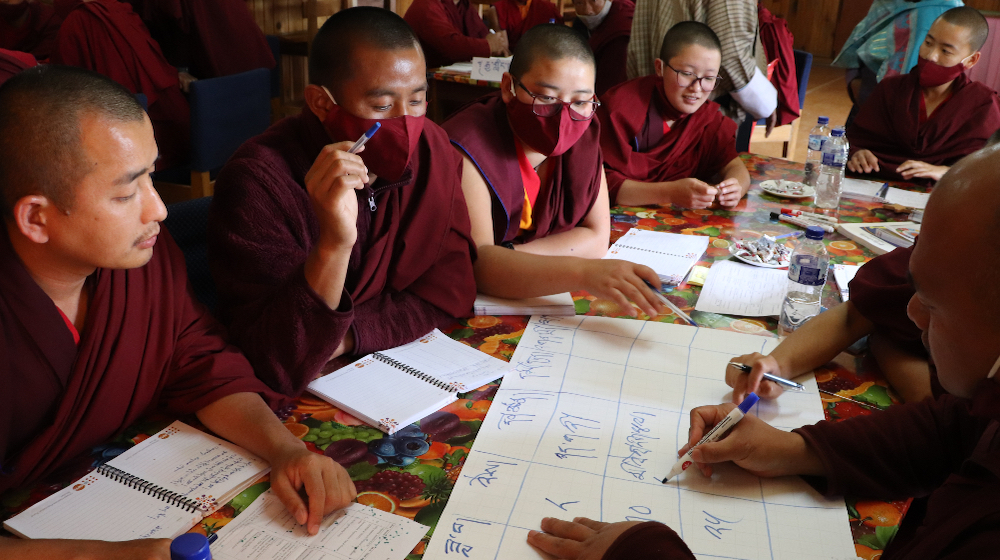 Sexuality education is among teachings by monks in Bhutan

THIMPHU, Bhutan – For centuries, the tenth day of the month has been celebrated in temples and monasteries throughout the mainly Buddhist Himalayan kingdom with religious mask dances performed as part of tshechu (“day ten”) festivals. Today, these traditional dances include messages on sexual and reproductive health and gender-based violence – topics once considered taboo.

“There has been a change in the mindset of monks, who now freely discuss and advocate on issues of sexual and gender-based violence, which in the past were perceived as a private matter,” explained Lopen Sherab Dorji of the Central Monastic Body, one of the first monks in Bhutan to participate in a life skills education training conducted by UNFPA. (“Lopen” is a title of respect.)

The agency had already engaged with religious leaders as far back as 2011, beginning with the Bhutan Nuns Foundation. Over the last decade, more than 1,500 nuns from 26 nunneries have been sensitized on sexual and reproductive health and rights issues and gender-based violence prevention.

“Nuns have played a crucial role by imparting critical health knowledge to rural women on issues such as the importance of a pap smear, menstrual hygiene, contraceptives and family planning, and have thus gained the trust, respect and confidence of the community,” said Nun Lhamo.

Since 2014, when UNFPA expanded its work on life skills-based comprehensive sexuality education to include male monks, 350 heads of monastic institutions have been trained on imparting life skills education. The approach “has helped demystify the perception that monks should not talk about women’s health and related issues,” said Lopen Sherab Dorji. Almost 50 monks trained by UNFPA provide counselling services to students across Bhutan’s 20 districts.

Her Majesty the Queen Mother, Gyalyum Sangay Choden Wangchuck, has driven this change. As a UNFPA Goodwill Ambassador and 2020 United Nations Population Award laureate, she has championed reproductive health and rights of women and girls for two decades, reaching out to every part of society – from religious groups to the military to schools and government agencies – to raise awareness on gender equality and issues that have come to include HIV/AIDS prevention and family planning. In the 1990s, His Holiness the Je Khenpo Trulku Jigme Choedra (Chief Abbot of Bhutan) pronounced contraception was not against Buddhist principles, in no small part to her advocacy.

The partnership with religious leaders has contributed to advancements in sexual and reproductive health services over time. Maternal mortality has dropped from a high of 380 in 1994 to 89 per 100,000 live births in 2017. Contraceptive use rate rose from 30.7 per cent in 2000 to 65.6 per cent in 2018. And over 95 per cent of births are now delivered by skilled birth attendants, as opposed to 23 per cent in 2000.

Thousands of young people are now being taught how to improve interpersonal relationships and lead healthier lifestyles.

“I look forward to imparting the skills and knowledge I have learnt when community members come to my monastery to offer prayers,” said Lopen Karma from Dungmin village in Pemagatshel District. “I also intend to engage primary schoolchildren on menstrual hygiene, teenage pregnancy, and advocate on the need to support one other.”