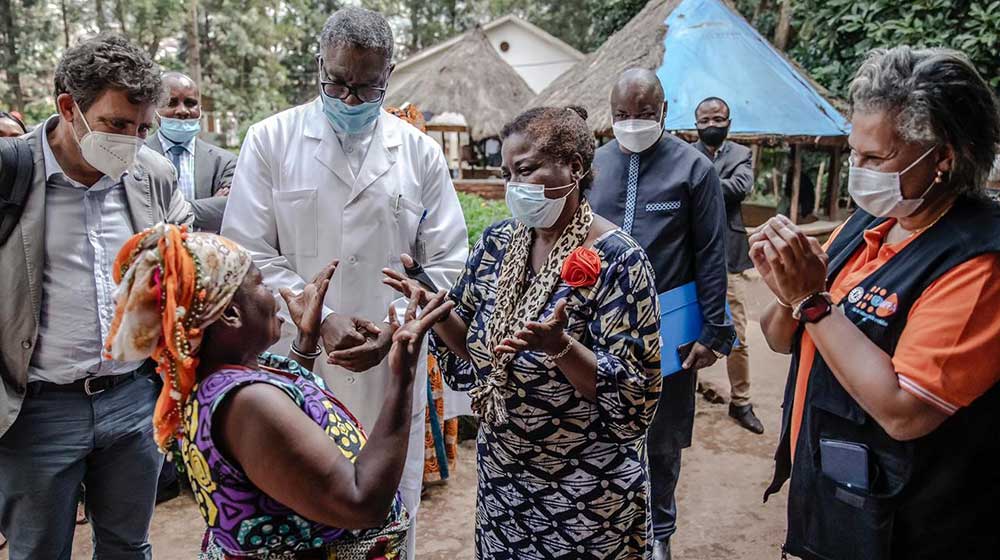 BUKAVU, Democratic Republic of the Congo – Lisa* was orphaned as a child and raised by her sister and brother-in-law. Growing up in Bukavu, a small town in South Kivu, the threats of violence conflict and widespread sexual violence were never far away. “The safest place for me was home,” she explained to UNFPA.

But that changed when she reached adolescence.

“One day, I heard them whispering and looking at me. They said the word ‘gift’ several times. Later, I realized what that meant – I was the gift,” Lisa recalled. “They gave me away and married me off to a man who was three times my age. I was 14.”

Child marriage is widespread in the Democratic Republic of the Congo, with some 37 per cent of girls married by age 18, according to UN data. For some, child marriage is seen as a way to secure protection from sexual violence – a girl’s husband becomes responsible for her safety. The possibility that her husband might be the perpetrator of such violence is often not considered.

A woman sits on a bench. She is seen from waist down, without identifying details. She wears a blue blouse and skirt.

In other cases, like Lisa’s, a girl is regarded as a tradable commodity with a shelf life.

Bodily autonomy
Gender-based violence, including domestic violence, conflict-related sexual violence, and harmful practices, are widespread in many parts of the country. Forced marriage is one such form of abuse.

Lisa experienced forced marriage not once but four times.

“The time came when I was no longer young, and he said he did not want me anymore and I was told to leave,” she said of her first husband.

Her relatives ridiculed her and then gifted her to another man, then another. Her value as a bride diminished with each forced union.

Today, she is the sole provider for her seven children.

She recounted this story to UNFPA Executive Director Dr. Natalia Kanem, who met with Lisa and other survivors of violence, at a schoolyard in Bukavu.

The survivors are part of the Child Protection Working Group, an organization working with UNFPA to strengthen efforts to protect children from abuse and exploitation. Together, they and UNFPA are calling on communities to safeguard the rights and choices of women and girls.

“Bodily autonomy is a foundation upon which all other human rights are built,” Dr. Kanem said. “Yet we see it violated repeatedly in life-derailing practices such as child marriage, a form of gender-based violence that robs girls of their childhood and threatens their long-term health.”

The hospital was founded by Dr. Denis Mukwege in 1999, as war raged in the countryside. Dr. Mukwege saw how women and girls were caught in the crossfires of crisis after crisis, how rape was used as a weapon of war, how the region continues to face one of the highest rates of sexual violence committed against women and girls.

As a gynaecological surgeon, he treated survivors whose reproductive organs were destroyed by gang rapes and weapons. Medical treatments could heal broken bodies, but Dr. Mukwege saw how emotional trauma persisted. He adopted a holistic approach – the pioneering Panzi Model – which integrated medical treatments with psychological counseling, legal assistance and socio-economic support.

“We can’t just treat the finger or the ear,” said Dr. Mukwege, who became a human rights activist and, in 2018, won the Nobel Peace Prize. “We have to see the person as an entire whole.”

UNFPA is working with the Panzi Foundation and other partners to support survivors. One such programme, a one-stop centre, takes inspiration from the Panzi Model, integrating medical, psychosocial and legal assistance for women and girls.

UNFPA and the Panzi Foundation have also joined forces to increase the capacity of health providers such as doctors and nurses in the management obstetric fistulas. Between 2013 to 2019, UNFPA helped 50,000 survivors of sexual violence in the country receive medical treatment, and almost the same number received psychosocial support.

During Dr. Kanem’s visit, UNFPA and the Panzi Foundation agreed to further strengthen their joint efforts.

Reflecting on the protracted crisis in the country and the continued violence against women and girls, Dr. Kanem said, “Too often, peace is measured by the silence of the guns. Yet peace and prosperity can only be achieved when we win the battle against impunity, and women and girls can live free from harm.”