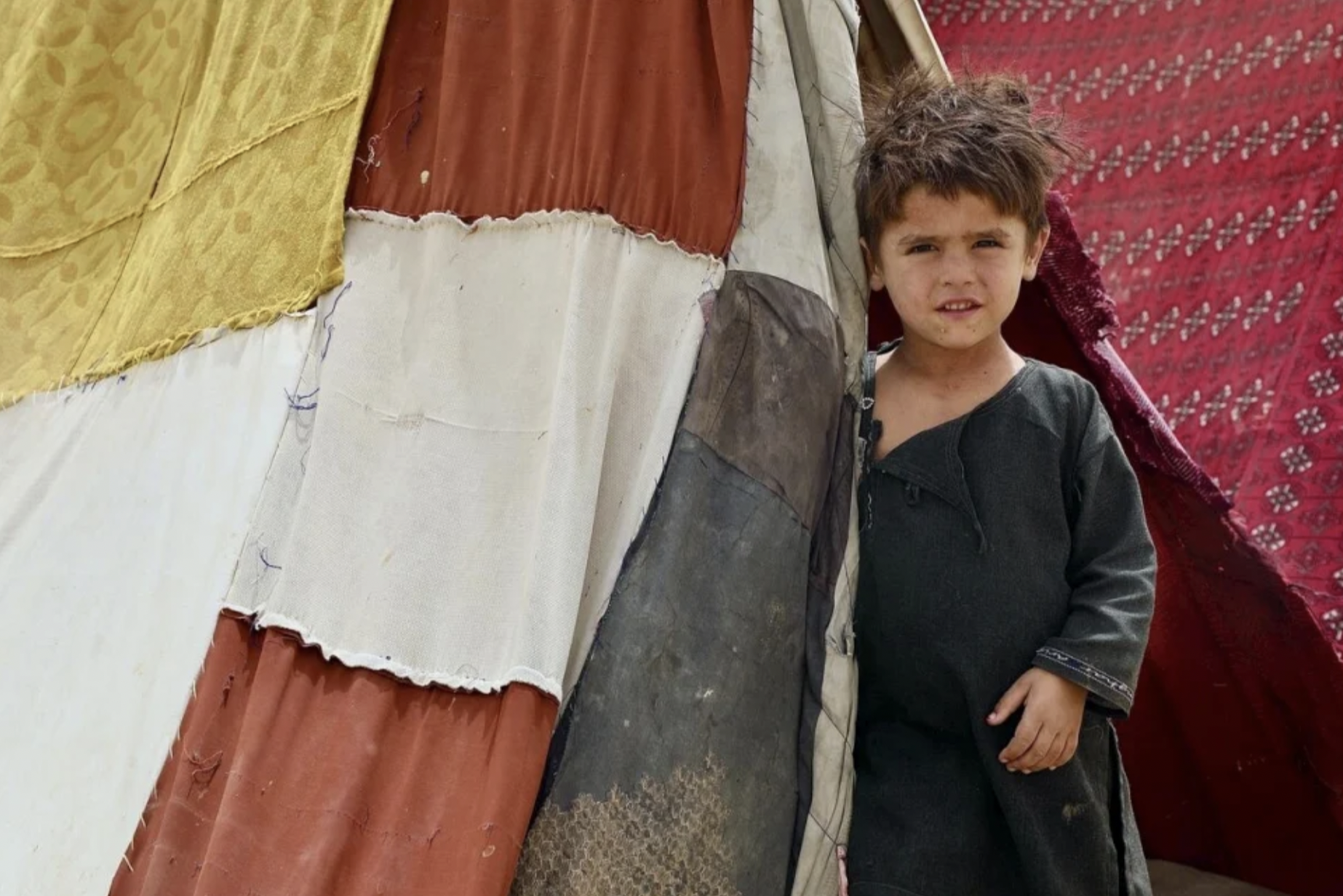 A widowed mother-of-four struggling to take care of her family in a camp is among the 270,000 Afghans displaced since the start of the year by the latest upsurge in fighting.

Two weeks after fleeing her home to escape clashes between government and opposition forces, 24-year-old Maryam* huddles in the shade of a makeshift shelter in Nawabad Farabi-ha camp on the outskirts of Mazar-e Sharif city in northern Afghanistan, seeking respite from the 45-degree-Celsius heat outside.

She came here from the Sholgara district some 55 kilometres to the south with her four children, parents and brother, after opposition forces stormed the area and engaged in running battles with government forces. Maryam said she heard gunfire breaking out all around their home as the two sides fought for control of the area.

“We had no time to gather anything. We fled with only a blanket,” she said, sitting in a tent made from cloth tied to sticks used as anchor points. Though plastic tents are available, the stifling heat renders them unusable, so camp residents rely on the most basic materials to protect themselves from the fierce sun and frequent dust storms.

Maryam and her family are among an estimated 270,000 Afghans who have been newly displaced inside the country since the start of this year by an upsurge in violence. As conflict intensifies in northern Afghanistan and other parts of the country, UNHCR, the UN Refugee Agency, this week warned of an imminent humanitarian crisis, saying failure to reach a peace agreement will see further displacement.

Amid an overall increase in civilian casualties, the proportion of women and children affected by violence has risen sharply since January, adding to the toll Afghanistan’s decades-long conflict has taken on people like Maryam and her family.

Maryam and her mother, Halimah, are both war widows, and carry the additional burden of trying to care for Maryam’s injured brother and chronically ill grandfather.

Maryam’s troubles began a decade ago, when the then 13-year-old was married off to a man she had never met. Initially, the teenager was led to believe that her husband also resided in the northern Balkh province, but after she got married, she was taken to the southern province of Helmand to live with her in-laws.

She had had a very different vision for her life, hoping to get an education and one day start working. But in Helmand – another province plagued by decades of fighting between government and opposition forces – she raised four children until her husband was killed in crossfire during one of the many battles in the area.

Following the death of her husband, Maryam moved with her two boys and two girls to Kabul, before eventually reuniting with her family in Sholgara earlier this year.

“At first, things were okay. There was relative calm,” she said. But after the latest violence they now find themselves living in Nawabad Farabi-ha camp along with 100 other families.

The city of Mazar-e Sharif may be a bustling commercial hub, but for internally displaced people (IDPs) in the camp there are few economic opportunities. With both men in the family injured or sick, Maryam’s eldest son is forced to wander the city collecting recyclable trash to try to earn enough to feed the family.

“There have been nights when we had nothing at all to eat,” Maryam explained.

Having been forced to move four times in the span of a few years, her children are unable to attend school and are dressed in worn clothes covered in grime and dust.

“My children haven’t worn new clothes since we left Helmand,” she said. “What kind of life is this? Look at what the sun has done to my child’s face,” she added, pointing at her youngest son Zarif’s reddened, blistered skin.

Maryam’s own face reveals the damage that repeated displacement and conflict have inflicted on her health. Her sunken cheeks point to the malnutrition that has run rampant across swathes of the country.

The World Bank estimates that at least 45 per cent of the country’s population suffers from malnutrition, mostly fuelled by poverty. A national drought likely linked to climate change and affecting up to 80 per cent of the country is adding further pressure to a population largely reliant on rain-fed agriculture and livestock grazing, raising fears of further mass displacement.

In the camp, families struggle to find clean drinking water. Many said their children have fallen sick from drinking the brackish water at a nearby well, and the only way to make it drinkable is to boil it for at least 20 minutes.

But finding wood in the desert area where the camp is located is difficult. Without an income residents cannot afford to go to the city and buy wood, so their children are forced to walk in the heat to find cleaner sources of water, a journey that simply increases their thirst.

For Maryam, the impact that displacement is having on the wellbeing and future of her children is the hardest thing to bear. “I really just want my children to have a good life and be able to go to school and get an education.”

This article was written by Edris Lutfi in Mazar-e Sharif.